Pandemic or no pandemic, you might have noticed that applying a “best practice” from someplace else sometimes fails to produce significant, sustainable improvements in your “place.” After decades of herculean efforts, often drawing upon the free exchange of “best practices,” in U.S. healthcare we’re still far behind what we’d hoped to achieve in clinical outcomes, spending, clinician burnout, and patient experiences.

We speculate that a contributing factor for these challenges is a mismatch between leadership and context. Before we explore that mismatch, join me for a brief review of different ways leaders can better make sense of their context, informing the mental map they hold about leading, and thereby offering opportunity for them to shift their decision-making:

To help us understand mental pitfalls hindering your impact as a leader, it’s helpful to review the Cynefin framework for decision-making. Pronounced ky-nev-in, the framework is widely known as a “sense-making device,” dividing the potential contexts a leader may find themselves into predictable and unpredictable worlds. Its purpose is to help leaders to rapidly understand the reality in which they’re operating and discern a path forward.

This framework has been used by governments around the world to counter terrorist and formulate policy, by pharma giants to develop new products, and by entrepreneurs looking to innovate and avoid trouble. Any challenge you’re facing today falls into one of the following contexts, ranging from Simple (ordered and predictable) to Complex (disordered and unpredictable). 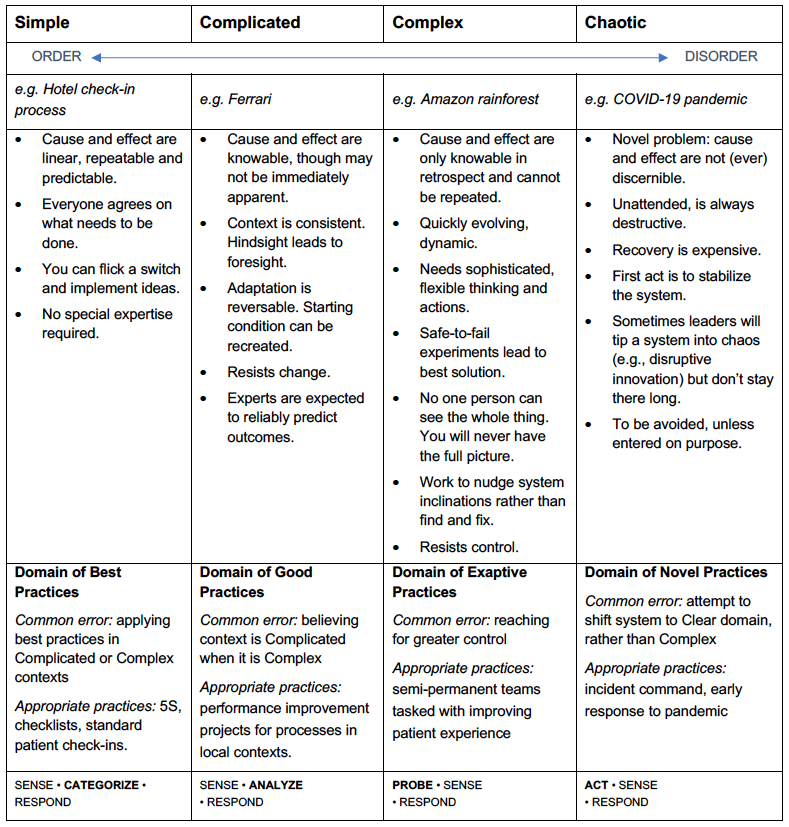 Why these distinctions matter: One approach that’s wildly successful for one of the above domains could be disastrous for others. That’s where leaders trip up and end up with bigger problems: choosing actions based on a mental map that is applied to the wrong domain.

We’ll narrow our discussion today to two domains: Complicated vs. Complex systems. As executive coaches, we often see healthcare leaders getting these two mixed up.

Think of the Complicated domain as a machine, and Complex domain as a living, breathing, evolving organism. A few examples:

David Snowden and Mary Boone, researchers writing for the Harvard Business Review, explain it like this:

“In a complicated context, at least one right answer exists. In a complex context, however, right answers can’t be ferreted out. It’s like the difference between, say, a Ferrari and the Brazilian rainforest.

Ferraris are complicated machines, but an expert mechanic can take one apart and reassemble it without changing a thing. The car is static, and the whole is the sum of its parts.

The rainforest, on the other hand, is in constant flux — a species becomes extinct, weather patterns change, an agricultural project reroutes a water source — and the whole is far more than the sum of its parts. This is the realm of ‘unknown unknowns,’ and it is the domain to which much of contemporary business has shifted.”

If you find yourself struggling to find an elusive right answer, it may be that one does not exist. You may be in a Complex scenario, not a Complicated one. Like so many lines of business in the 21st Century, contemporary healthcare has predominantly shifted to a Complex environment, and that’s your most likely reality.

In the Complicated context, problems are viewed mechanistically, with standardization, assembly lines, focus on efficiencies, organization by function and worker/manager separation as common traits.

The Complex context, on the other hand, requires you to break the Complicated framework you’ve grown familiar with and likely feel comfortable in. An effective, Complexity-fit leader encourages experimentation, invites different voices into the discussion, and tolerates failures as a way to uncover the best solution.

Note that Complicated and Complex are not mutually exclusive. We are holding these two systems in juxtaposition as a learning tool. A sophisticated leader can see the system or subsystem they are working with and shift their mental map accordingly. The common challenge is to sense and shift behaviors accurately.

A cautionary tale: How to break things

Years ago, a string of shark attacks left tourists dead or injured in Hawaii. Local authorities feared tourists would stay away if sharks weren’t controlled. Legislators approached the problem as a Complicated issue, with clear cause-and-effect, and predictable outcomes based on specific actions. They invested $150,000 in a shark population control program, designed to kill off tiger sharks. The plan was wildly successful in meeting that objective.

A couple of years later, local fisheries began to suffer from a sharp decline in fish. The local fishing industry conducted studies to understand where all the fish had gone. Those studies found that by eliminating apex predators (tiger sharks), medium-sized predators increased substantially and preyed on smaller fish. The smaller fish were those which we prefer to consume.

By attempting to solve a tourism problem — shark attacks — with a Complicated mindset, Hawaiian authorities had unwittingly decimated its fishing industry.

Can you think of a situation that you’ve been part of where leaders applied a solution that created unforeseen problems? It’s possible that solution was derived from a Complicated mindset to solve a Complex problem.

Putting it all together

What to do with this information? Awareness is a good and necessary first step. Because Complex problems can’t be solved with a clear, 5-step recipe, we can’t leave you with one-size-fits-all guidance for transforming into a Complexity-fit leader overnight.

We do invite you to stay tuned for our series on Complexity-fit competencies. Until next time, acknowledging that your mental map might be at odds with Complex challenges you’re facing today is an excellent place to start.